County-owned property in Golden Gate Estates has drawn offers from a variety of organizations since it was put up for sale in February, with an animal sanctuary, investors and developers all vying to buy the 47 acres.

County staff on Tuesday will present the offers for the undeveloped property along Immokalee Road, across from the Publix on Randall Boulevard, to county commissioners.

Staff is recommending the county accept the offer of the highest bidder — Metro Commercial Development Group LLC, which would purchase the land for $3.5 million. 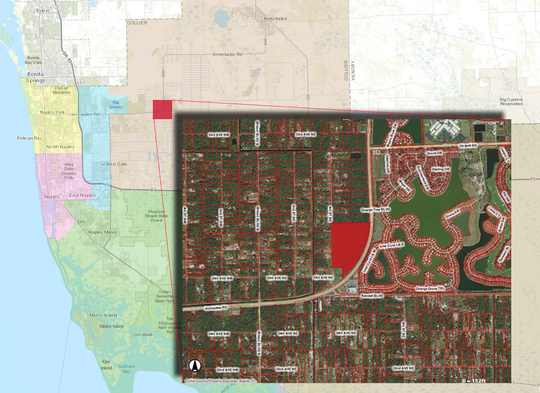 A map showing the location of the 47 county-owned acres off Immokalee Road, near Randall Boulevard, that have drawn the interest of investors. (Photo: Collier County)

The company, a tenant agent for more than 100 retailers, plans to create "a quality, vibrant mixed-use development to serve the needs of the rapidly growing eastern Collier County population," according to a March 29 letter sent to the county.

The county's in-house real estate appraiser has valued the property at $3.52 million and an outside independent appraisal put the value at $3.63 million.

"Based on the offers received to date, Metro Commercial's proposal seems fair and equitable for the land," county staff wrote in a report to commissioners. "The County does have the option to counter."

The property, which came to the county in the 1980s as part of an agreement with development company Gulf American Corp. after that company failed to live up to its obligations, also drew interest from other organizations.

Having outgrown its Current location, the Shy Wolf Sanctuary has made the county an offer to buy the land for $1 million.

The nonprofit sanctuary, which has long looked to move from its Current 2½ acres off White Boulevard to a bigger site, is proposing to build enclosures for its animals, hurricane-rated shelters for pets during a storm, an educational and research facility and a veterinary clinic.

By building facilities strong enough to withstand Category 5 storms, the sanctuary would be able to shelter pets of residents who are evacuating, sanctuary officials wrote in an email blast to supporters.

"It would be a tremendous resource to the community," said Deanna Deppen, executive director for the sanctuary.

The veterinary clinic would also be a benefit to Golden Gate Estates residents, she said.

"You have to drive quite a ways to get to the nearest clinic," Deppen said.

The sanctuary's pitch also includes a passive-use park surrounding the sanctuary with trails for horseback riding, biking and hiking.

The nonprofit operates on donations and has been saving up to acquire a bigger site, Deppen said.

"We've been putting money away for many years," she said.

If the sanctuary is successful in buying the property from the county, the next step would be a campaign to raise funds to build on the land in phases, Deppen said. The sanctuary also intends to look for Grant funding.

Another offer received by the county proposes to develop the property as the commercial hub for the surrounding communities.

Robert Crown, vice president of Crown Management Services, LLC, offered the county a land swap that would send 30 acres near the intersection of Golden Gate and Wilson boulevards to Collier in exchange for the 47 acres.

"Our objective would be to develop the Randall Curve property as the Commercial Hub
to serve the Golden Gate Estates community by providing many commercial services that are needed for the community and creating full and part time jobs," Crown wrote in a letter to county officials.

Although the county would have the ultimate right to decide how it would use the 30 acres, Crown's pitch to county officials requests that a portion of the tract would be designated as a park serving the Estates community.

As part of the proposal, Crown Management Services would provide $750,000 for a park, or the county could use the money as it sees fit.

The pitch also includes providing the county with one acre at the Randall Curve property for a county service building and a rezone of the 47 acres to allow commercial uses.

The final offer to the county came from a group of investors who want to buy the 47 acres for $1.05 million.

One of the investors, Jonathan Jensen, told the Daily News in January that the group might donate part of the land back to the county to be used "as they see fit for the benefit of the community," He added that the group "would love to see walking trails, dog park, playground, etc."

"For the remaining acreage, we (as Current property owners in Golden Gate Estates) envision developing the land with a focus on meeting some of the needs of the community for convenient entertainment sources such as a movie theater, gym, and restaurants," Jensen wrote in an email.

Commissioner Bill McDaniel, whose district includes the 47-acre property, said Tuesday that he hadn't seen any of the specifics with regards to the offers yet.

The county, he said, needs to find the "highest and best use" for the property and figure out what would be the greatest benefit to residents in the area. Commissioners are expected to weigh the proposals at the Tuesday meeting.

"I would suggest a thinning of the herd," McDaniel said.

Past discussions about the property have also included a proposed partnership with the Collier County School District that would put a joint vehicle maintenance facility on the land. Those plans drew criticism from some Golden Gate Estates resident.

In late March, county staff held a public information meeting to present the plan for the joint-use facility at the Randall Curve location.

Roughly 40 attendees were "adamantly against a bus barn and any potential industrial uses" at the county property, county staff wrote in a report to commissioners.

Instead, some of the proposed uses the residents would like to see are commercial/retail, a community park and animal preserve, staff wrote.

After the March meeting, the county received an offer for a "potential partnership with the developer of the Immokalee Road Rural Village" to provide land for a School District bus barn and county road maintenance facility, according to the staff report.

The 2,500-acre village would be located on the east side of Immokalee Road, about two miles north of the intersection of Immokalee and Oil Well roads. The project, which would include up to 4,000 units, is still in the planning stages.

According to the proposal, the developer would offer roughly 30 acres for the bus barn and county facility. The county would either purchase the site or provide impact fee credits, according to a letter engineering firm Hole Montes sent to county officials earlier this month.

County staff are expected to ask commissioners Tuesday to let the county manager explore a potential partnership with the developer and work with the school district to put joint facilities near the proposed village.

If the board accepts Metro Commercial's offer, the proceeds from the sale of the county property should be used to pay for the county's portion of a future joint use facility, county staff wrote.