At the start of last year’s Market Trends presentation on the state of Southwest Florida’s real estate market, LSI Cos.’ founder and CEO showed a picture of an elephant in a conference room.

The image was meant to convey a warning that while the market in Charlotte, Collier and Lee counties had been robust, signs pointed to a possible downturn.

This year, the elephant in the room was back, only smaller and less ominous.

“It’s not as big an elephant anymore, but it’s still in the room,” Randy Thibaut says, speaking to some 400 gathered at the Miromar Design Center on Aug. 13. 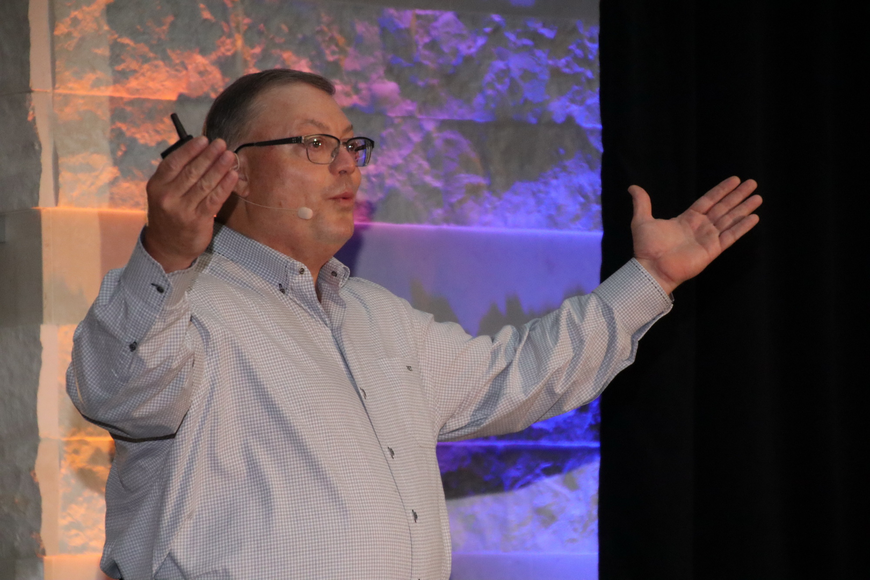 “You need to be aware of the challenges that are out there,” added the head of the Fort Myers-based commercial real estate brokerage firm.

Many of those challenges remain from 2018: The possibility of rising interest rates that cut into buyers’ ability to borrow, despite a nominal late July cut in a benchmark interest rate by the Federal Reserve Board; tariffs and the larger impact from a prolonged trade war with China; and market domination by a trio of national home builders.

Thibaut notes that building permits in the three-county region for 2019 are likely to come in around 14,250 based on those pulled year-to-date and deals expected to move forward by year’s end.

If that figure holds true, it would represent a roughly 19% decline from 2018, a year in which 17,600 permits were pulled in the region. That figure, however, represented the highest amount since 2002, and exceeded the predicted 16,500.

By comparison, in 2009 just 2,066 building permits were issued in the three counties.

Much of the new permitting has been tied to multifamily rental projects and assisted living facilities, and Thibaut expects developers will take a more cautionary approach and spend the next year assessing inventory absorption before proceeding with new projects.

If that occurs, building permits for the first half of 2020 will almost certainly drop by double digits.

“I expect for the next year or so we’re going to see developers hold off,” Thibaut says.

Still, LSI’s research painted a rosy picture of the Southwest Florida market for the most part.

Thibaut notes that both single and multifamily home resale numbers and median prices have held steady from 2018 to 2019 to date, a sign of stability.

Some communities, though, such as Barron Collier Cos. and Tom Monaghan’s roughly 5,000-acre Ave Maria in a largely rural section of Collier County, have flourished.

And while the volume of deals is diminishing somewhat, Thibaut notes that most transactions — such as The Carlyle Group’s recent $72 million purchase of the Citrus Park manufactured home and RV community in Bonita Springs — are larger.

He also contends that transactions like the $11.6 million sale of the long-struggling Murdock Village, in Charlotte County, to Fort Myers-based Private Equity Group in mid-August portend a solid future.

“Murdock Village, together with Babcock Ranch, is going to be a game-changer for Charlotte County,” Thibaut says.

Proposed roughly two decades ago, plans for some 2,400 residential units and commercial space in Murdock Village stalled during last decade’s economic recession and haven’t been resuscitated.

But Thibaut believes Private Equity Group, a company with a more than 30-year track record of successful projects, will be able to jumpstart development there.

“They got a great buy and that means they’ll be able to sell land to builders at the right price going forward,” he says.

“Is retail shifting? It already has,” he says. “And that’s not necessarily a bad thing.”

He points to conversions of a former SweetBay Supermarket in Fort Myers to office space; a former Saks Fifth Avenue department store in the city’s Bell Tower Shops to a Dave & Buster’s entertainment emporium; and CineBistro’s move to open a movie theater in an old Sears department store in Naples as evidence that “experiential” and service-based retail is taking the place of stores that are largely dependent on apparel sales.

Many such legacy merchants are struggling to compete amid the advent of e-commerce shopping popularized by Amazon and others, he says.

Likewise, organic, specialty and discount grocers Like Sprouts, Lucky’s Market and Whole Foods Market, to name a few, are swarming Southwest Florida and elsewhere in an effort to capitalize on changing demographics and consumer preferences.

“They now comprise half of all the new retail space leased nationally,” Justin Thibaut says. “It’s a huge trend and something you need to pay attention to.”

Also noteworthy are a trio of new industrial and distribution projects in Fort Myers — including the 225-acre Premier Airport Park — that together are projected to add 5.5 million square feet to the market.

At the same time, nine new hotels valued at more than $170 million are either under construction or well into planning in the region, including the 243-room Luminary Hotel in downtown Fort Myers.

That 12-story, $80 million project from Tampa’s Mainsail Lodging and Development is being built concurrently with the redevelopment of the city’s Harborside Event Center. Upon completion next August, the hotel is expected to carry Marriott International. Inc.’s Autograph Collection flag.

Elsewhere, TPI Hospitality is also developing a Jimmy Buffet-themed Margaritaville Resort on Fort Myers Beach, and Arthrex is building a new 160-key hotel as part of a major office expansion, in Naples.

Justin Thibaut also cited major development projects by Arthrex, which is building 300,000 square feet of office space in North Naples to expand its existing footprint; NeoGenomics Inc., which recently announced plans for an estimated $60 million headquarters off Alico Road, in Fort Myers; and others as evidence that the region is both growing and diversifying economically.

Together, Arthrex and NeoGenomics expect to hire more than 600 new employees within the next three years.

“We’re nine years into a seven-year economic growth cycle,” says Randy Thibaut. “But it looks like we still have some runway ahead of us.”

Most of our business is referrals by word of mouth; from past Sellers and Buyers who we have helped; please ask for and check out our testimonials and Sales Stats.  Thanks, Barry & Kim