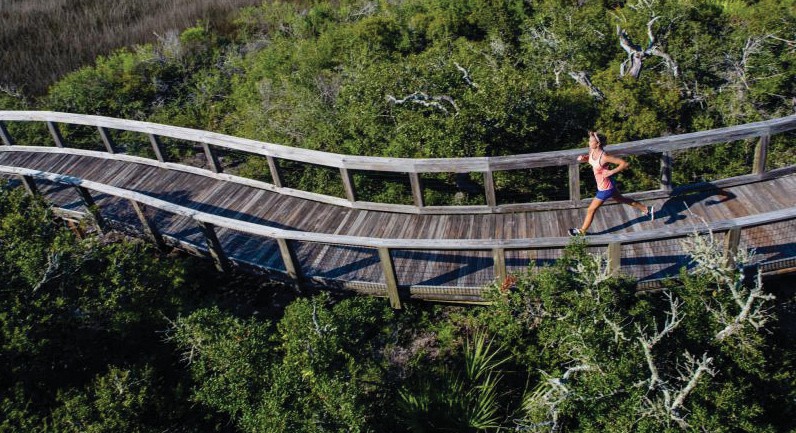 From mile to wild

One of Southwest Florida’s many delights is how nature and culture co-exist, dancing cheek-to-cheek, if you will.

Take the Four Mile Cove Ecological Preserve as an example. This 365-acre chunk of pristine nature is just on the Cape Coral side of the busy Midpoint Bridge, which spans the Caloosahatchee, the river flowing between Cape Coral and Fort Myers.

In pleasant weather November-May, you can rent kayaks and paddle the still waters of the quiet preserve or ventour out into the Caloosahatchee, which empties a few miles away into the Gulf of Mexico.

On foot, you can leave the hurly-burly of the Midpoint Bridge behind year-round and venture out on a 6,600- foot nature trail to spot eagles, ibis and other resident avian species. The preserve also has two observation piers, with fishing permitted from the one on the river. 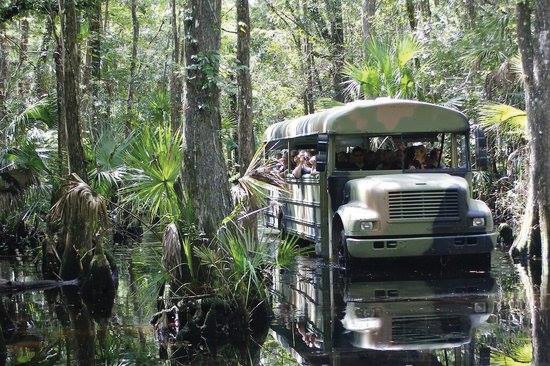 It’s all right here, at the entrance to Cape Coral.

After communing with nature, continue into the city for shopping, movies, parks, golf and restaurants galore.

Or head back toward Fort Myers and find a cultural hub practically at the foot of the span. Straight ahead on Colonial Boulevard, the Lee County Alliance for the Arts and the Broadway Palm Dinner Theatre offer art and entertainment just minutes away from Four Mile Cove.

Also on the Fort Myers side is another scenic delight: stately royal palm-lined McGregor Boulevard and the lovely neighborhoods that flank the road all the way north to the Edison and Ford Winter Estates. Instead of going straight across the bridge on Colonial Boulevard, keep to the right and exit for McGregor, then turn north toward downtown.

No matter which direction you come from or where you go afterward, a trek through Four Mile Cove Eco Preserve by land or water gives you an idea of what the sights and sounds of Southwest Florida were like before bridges spanned the rivers and condos pierced the sky. 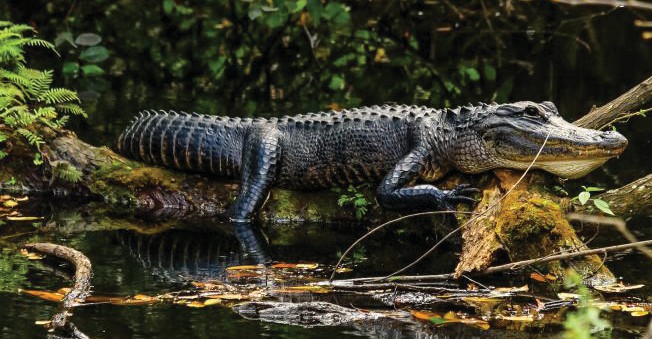 Babcock Ranch is about the past and the future, all wrapped up into one innovative destination straddling the Lee and Charlotte county lines. A peek into the future of sustainability, walkability and “front porch living,” it’s America’s first solar-powered town.

You can step away from the sprouting neighborhoods and Founders Square with its shops, restaurants, fitness center and more and have a look back into the past by taking a Babcock Ranch Eco Tour. You’ll discover a Florida long before the Internet and interstate highways — a Florida described by Patrick Smith in “A Land Remembered,” the beloved novel about the Sunshine State.

Climb aboard a Babcock Ranch swamp buggy and dip into the wilderness of the massive property. The narrated 90-minute ride takes guests into a wild, rough and beautiful version of Florida, complete with birds and alligators and perhaps deer and wild hogs. The trip meanders through four different eco systems, including Telegraph Cypress Swamp, and includes the working cattle ranch for which the community of the future is named. The tour includes lunch at the Gator Shack.

Of hundreds of reviews on TripAdvisor, 81 percent rate the experience as excellent and another 16 percent peg it very good.

¦ The Bailey Tract at ‘Ding’ Darling

The name “Ding” Darling might throw visitors for a loop. Ding? What is that? A sound effect or a bird? An endangered species of some kind found only on Sanibel Island?

None of the above.

Jay Norwood “Ding” Darling was a Pulitzer Prizewinning cartoonist who had a passion for conservation and the outdoors. He died in 1962, but his name lives on in a national wildlife refuge that covers about half of Sanibel Island. Within the J.N. “Ding” Darling National Wildlife Refuge, the Bailey Tract is a freshwater ecosystem that has a walking loop from .3 miles to 1.1 miles, depending on the route taken.

Like much of this magical barrier island off the Lee County coast, the tract is a haven for flora and fauna. Floridahikes.comdescribes it as “… a quiet place, where the sea breeze rustles through cattails.”

Northerners of a certain age might have a question here: Gumbo limbo? Isn’t that the name of an old Jack Lemmon movie?

No. That would be “Under the Yum Yum Tree,” which was released in 1963, a year after Mr. Darling died. It was also the year the causeway to Sanibel opened. Native to South Florida, the gumbo limbo is known by locals as the “tourist tree,” a nod to its red, peeling bark.

You can explore the Bailey Tract on your own or with naturalist guides who are happy to share their knowledge about the delicate ecosystem and its inhabitants.

They also know that “Ding” Darling is not the name of a bird.

The name of this state park evokes two Florida legends.

One is Barron Collier, the pioneering early 20th century business tycoon for whom Collier County is named (the state park is in that county, about 17 miles southeast of Naples).

The other part of the park’s name, Seminole, refers to the legendary native people who once ruled this part of the state and fought United States soldiers in the 19th century.

The 7,271-acre park is “within one of the largest mangrove swamps in the world,” according to floridastateparks.org. Its flora and fauna may remind visitors of the nearby and better-known Everglades National Park.

Anyone who’s been to Fort Myers will no doubt be familiar with the stately royal palm trees that were planted by Thomas Edison along miles of McGregor Boulevard. According to the website, Collier-Seminole State Park is home to one three original stands of royal palms in Florida that co-exist with large areas of mangrove swamps.

The park has miles of trails for hiking and bicycling and is a destination for fishermen, birders, picnickers and campers (the campground has shower and laundry facilities). Boat ramps and canoe rentals make it easy to explore the watery vastness.

To many Northerners, Florida consists of just two destinations: Miami and Disney World.

But the Sunshine State is about so much more than the glamour of Miami and the glitter of Disney.

Our state park system refers to itself as the “real Florida.” And Fakahatchee Strand Preserve State Park, below, the largest in the state system, is a fabulous slice of that Florida. Near the peninsula’s southern tip, it consists of 120 square miles where the subtropics and tropics converge in the world’s largest strand swamp.

This remarkable sanctuary is home to 44 species of orchids, including the legendary and elusive ghost orchid. You might also spot rare species such as the American crocodile and the Florida black bear.

Floridahikes.com calls the Fakahatchee “the Amazon of North America.” How lucky for us that it’s so easy to reach, off State Road 29 just south of where the two-lane road intersects with Interstate 75 in Collier County.

Launch a canoe or kayak and explore the magic of an Amazonian swampland. Or come to fish, bicycle or hike. No swimming is allowed.

The 2,500-foot-long Big Cypress Bend Boardwalk meanders through the swamp and ends at an observation deck and alligator pond.

Please Share this Blog / Page with anyone who you think the info will help.  Feel free to refer any family or friends; it is the greatest compliment that you can give to us; we really appreciate referrals, and we will help in any way we can.  Most of our business is referrals by word of mouth from past Sellers and Buyers who we have helped; as well as fellow REALTORS also; please ask for and check out our testimonials.  Thanks, Barry & Kim ☘"