THREE DECADES AGO, ROB VAN WINKLE burst onto the scene as Vanilla Ice, a rapper with a hit song, “Ice Ice Baby.” 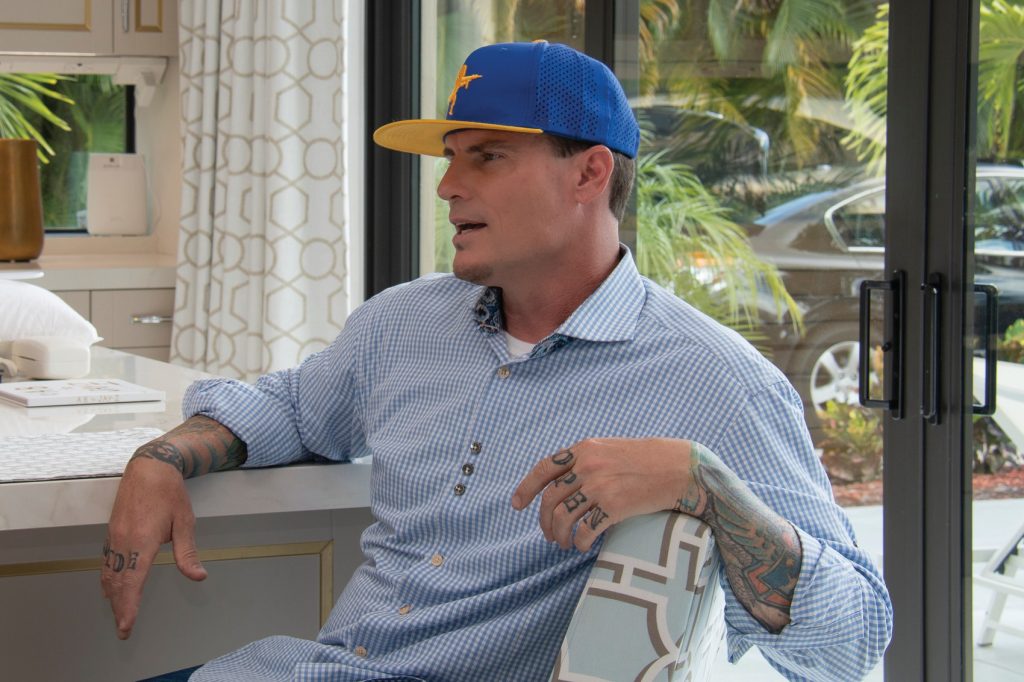 That was the rap single to top the Billboard pop charts.

Nearly 30 years later, Mr. Van Winkle is still at it.

He’s now 51 and he still performs a concert or two every month or so.

But today, he’s ready to talk about “The Vanilla Ice Project,” his home improvement show, which is set to begin its ninth season at 9 p.m. July 27 on The DIY Network.

There’s an intensity to Vanilla Ice, the rapper.

That same intensity carries over to Mr. Van Winkle, the TV personality.

His handshake is firm and his eyes beam from beneath the bill of his baseball cap. He’s tall and he’s muscled, presumably from all that construction work, though he has a full gym in his house.

The tattoos on his knuckles read “WIDE OPEN,” and Mr. Van Winkle is animated as he talks about how he came into the house-flipping business by accident. 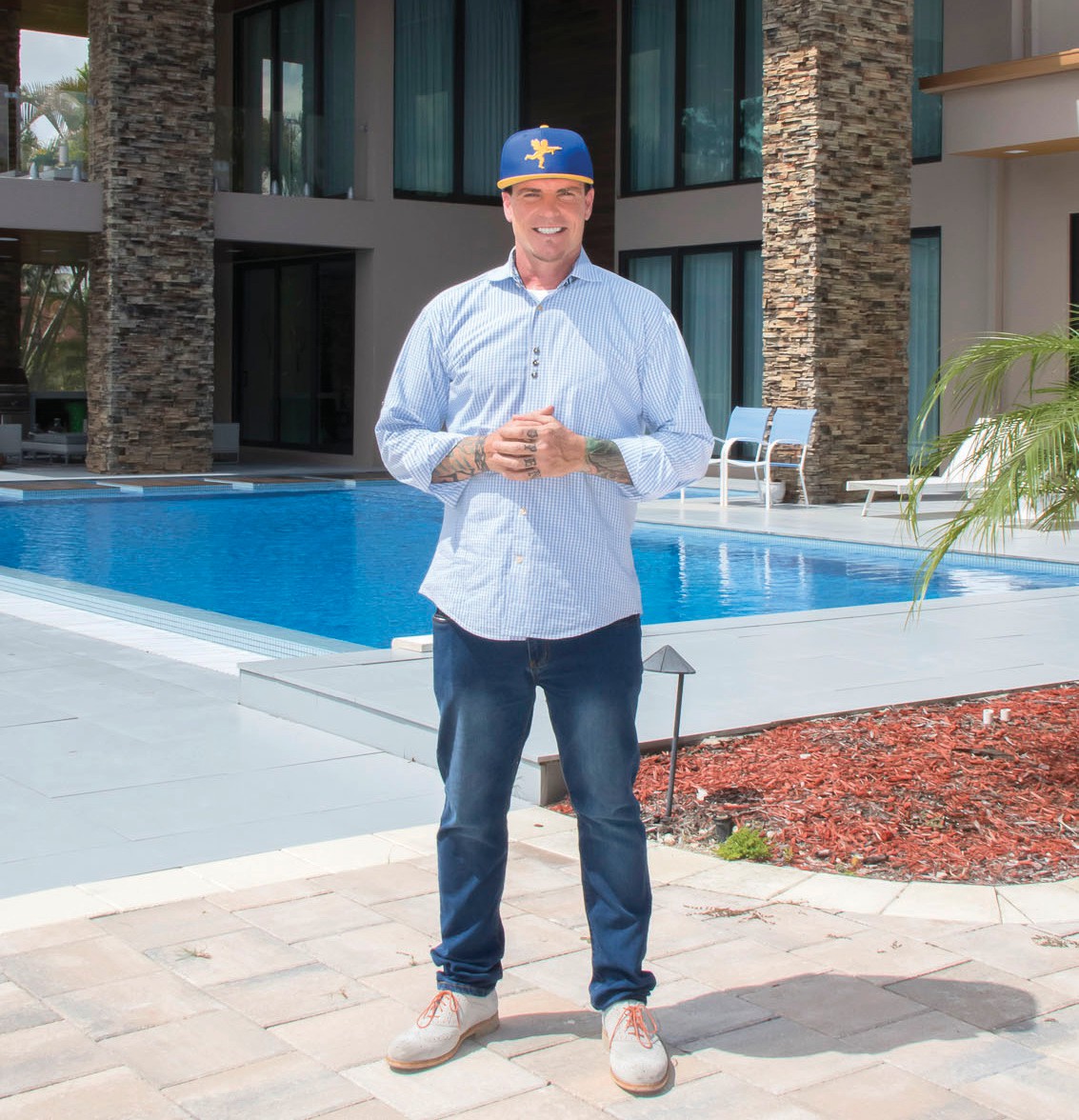 “Back in the day, I made a lot of money real quick. I was 16 years old and I figured, hey, if I’m working in California, instead of staying in a hotel for three or four months, let’s buy a house there, so I bought a house there, right next door to Michael J. Fox,” he said during an interview in his own home, a two-story manse near Wellington, about 10 miles west of West Palm Beach.

Other houses followed — Miami, a place in Dallas, because that’s where he’s from, another near a ski resort because he likes to ski.

“I went on tour for three years and never saw any of the houses. I thought, ‘Oh, my God.’ I get back home and think ‘I’m young and dumb. What a dummy. Why did I buy all these houses?’”

“I literally made millions and I never spent a night in them,” he said. “I didn’t even change the carpet or paint.”

He was ready to buy some more. 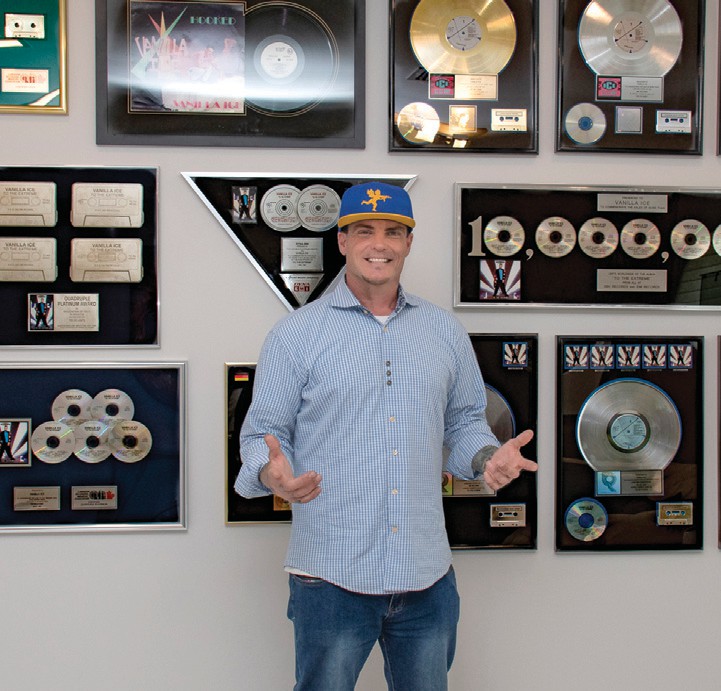 For much of that time, he’s made a business of buying, fixing up and selling houses.

And he’s learned by doing.

He remembers an early project, an Art Deco-style house on Miami’s Star Island.

“I paid these decorators a big hefty sum to come do it,” he said. “I had an acrylic staircase with fish swimming in each staircase. I had the most modern, cool stuff.”

“But when you slept there and lived in it, it was horrible. I hated it,” he said. “I felt like I was living in a nightclub.”

“I was sleeping with my friends in their one-bedroom apartment just to get out of this house,” he said.

He’d spent a fortune having the house tarted up, but it clearly needed to be reworked to suit him.

“Instead of hiring decorators to redo the whole house, I started looking in magazines, started learning about different earth tone colors and throw pillows and how to warm a place up, how to remove all the sponge painting from the ’90s on the wall and all that crap,” he said. “So I redid the house all by myself and I had such a good time and it took forever. I did it and it was a proud moment.”

He learned about the impact of color and earned a degree in design 18 years ago. He received a general contractor’s license 23 years ago.

His own house is comfortable, though that is 24-karat gold on the bathroom fixtures and chandeliers. Kitchen hardware sparkles with crystals.

The 72-inch Miele refrigerator literally cost $100,000, and the dishwasher has a self-closing feature, though Mr. Van Winkle concedes he prefers handwashing dishes, rather than going through the steps of stacking them in the dishwasher, then removing them from the machine.

The fittings in the house clearly can’t be found in your local home center.

“I didn’t want to have things in my houses that you could buy there,” he said.

He’s attended international builder shows and, as a rock star, has stayed in lavish hotels around the world — Latvia, Estonia, China.

Some of these places are like Las Vegas on steroids.

“Now I want to recreate it,” he said.

“These cabinets — they’re metal, not wood. They come from Prague,” he said. “A lot of these materials come from outside the country. In the Baltics, where they have lots of money, they have builder shows, with lots of products like you’re not going to see on Aisle 10.”

He used a special glass for railings of his stairwells and balconies.

“It’s the clearest of all glass and seamless,” he said.

This house was built from the ground up.

“That’s where I feel it out. Exposure is everything. You want to have that sunshine and bring it in,” he said.

After all, it is Florida.

There are automated drapes and blinds in the living room that are designed to open and close depending on the sunlight, so you can see both the sunrise and sunset.

“Everything is thought through and is something over which I’ve lost sleep,” Mr. Van Winkle said.

Perhaps that’s a little surprising, especially given that he frequently does not give himself a fixed budget for his projects.

He did for the Season 9 project house, in Wellington.

“It will cater to more of middle America. I’m showing how they can turn their house into a mini-mansion, where to put that money and how,” he said.

That’s modest for Palm Beach County — and especially for Wellington, which is famous for its equestrian scene.

“Money flocks around money. That’s why all the billionaires have been around Worth Avenue,” he said. “Wellington is like the new money spot — Tom Hanks. Bruce Springsteen. Billy Joel. Bill Gates.”

That points to his philosophy on flipping properties.