U.S. Housing and Urban Development Secretary Ben Carson said during his first visit to Minnesota on Tuesday that he would like to see more local governments follow Minneapolis’ example of addressing homelessness by eliminating single-family zoning.

Carson said educating more people about single-family zoning, and fighting off “NIMBYism” or “Not In My Backyard” will be important. The Minneapolis City Council passed an ordinance to do away with single family zoning in December -- becoming the first major city in the country to decide to upzone its neighborhoods historically reserved for single-family homes.

“The correlation seems very strong: the more zoning restrictions and regulations, the higher the prices and the more homeless people,” Carson said. “So armed with that knowledge, we have to work with these various places. And I don’t think there’s anybody that wants to see homelessness and squalor. We just have to start utilizing the facts and utilizing the evidence to create the policies.”

His visit comes as Minneapolis City Council members and advocates grapple with the city’s affordable housing crisis, as the renter-dominated market continues to cause those seeking housing to lament rising rents and a lack of housing options available. The city is also facing continued challenges around how to provide housing and other services for its unsheltered residents.

Carson, who has led the federal housing agency under President Donald Trump’s administration since 2017, toured the Hawthorne EcoVillage in north Minneapolis. The 75-unit apartment community opened in November 2017 and takes up four blocks off Lowry Ave N. It includes a combination of studios, one-, two- and three-bedroom units and four townhouse-style units that cost between $670 and $995 per month. A family of four can make up to $45,200 to qualify for an apartment there.

Carson toured the rooftop and was eagerly shown by Project for Pride in Living staff and the Hawthorne EcoVillage property manager how rainwater is captured and reused and where solar panels would eventually be placed. He also saw a vacant home that would be occupied soon. That unit cost $925 a month.

After the tour, Carson said that the apartments were “a beautiful concept” of affordable housing, ecological features and holistic communities, as well as public-private partnerships.

“This also is a prime example of the fact that just because you’re a low-income person doesn’t mean you have to live in squalor,” Carson said. “These units are very nice, I think anybody would want to live in [them]. They look just like any apartment that you would find anywhere in the country and that’s what you want to see, you don’t want to see a situation where ‘oh those are for low-income people’, and ‘these are for middle-income.’You want to have a mixed neighborhood.”

Taking 10 minutes for questions from the media, Carson fielded questions about Minneapolis eliminating single family zoning, criticism of his agency’s efforts around affordable housing and Trump’s chances of winning re-election in 2020. He declined to comment on a question about Greg Russ, executive director of Minneapolis Public Housing Authority, being tapped to lead the New York City Housing Authority, saying he could not confirm that and did not want to discuss personnel matters. A Minneapolis Public Housing Authority official later confirmed that Russ would be leaving for the position. The rest of Carson’s visit included meeting with Minnesota Gov. Tim Walz and visiting a local HUD field office.

Walz said ahead of his lunch with Carson at Pizza Luce that he planned to stress the housing affordability challenges statewide because “this is not just a Minneapolis-St. Paul issue” and talk about ways the state can partner with HUD. The state receives about $800 million in HUD resources and works with the agency on a variety of issues including Section 8 housing and building and maintaining affordable housing in communities. He also planned to talk to Carson about how the federal Veterans Affairs Supportive Housing program, which provides vouchers to help homeless veterans and their families, is part of the state’s homelessness initiatives.

“We’re going to talk about some of the rollbacks HUD has proposed and some of the rule changes they’re making that we think is going to make it harder for us to partner to build affordable housing,” Walz said. “So I just want to use this as an opportunity to talk to the secretary, as he sits right in Minneapolis, to understand what some of our challenges are and see if we can articulate those to get some changes.”

But Carson’s schedule did not include meeting with Minneapolis Mayor Jacob Frey or other city council members who made affordable housing a key part of their platform and have received national attention over their collective push for tenants’ rights and increasing housing opportunities under the Minneapolis 2040 plan. Frey said that he learned of Carson’s visit that day and his office had not received an invitation to meet with him. He said inclusive zoning is something that is becoming more widely accepted and was “not surprised that HUD is well aware of the effort.” 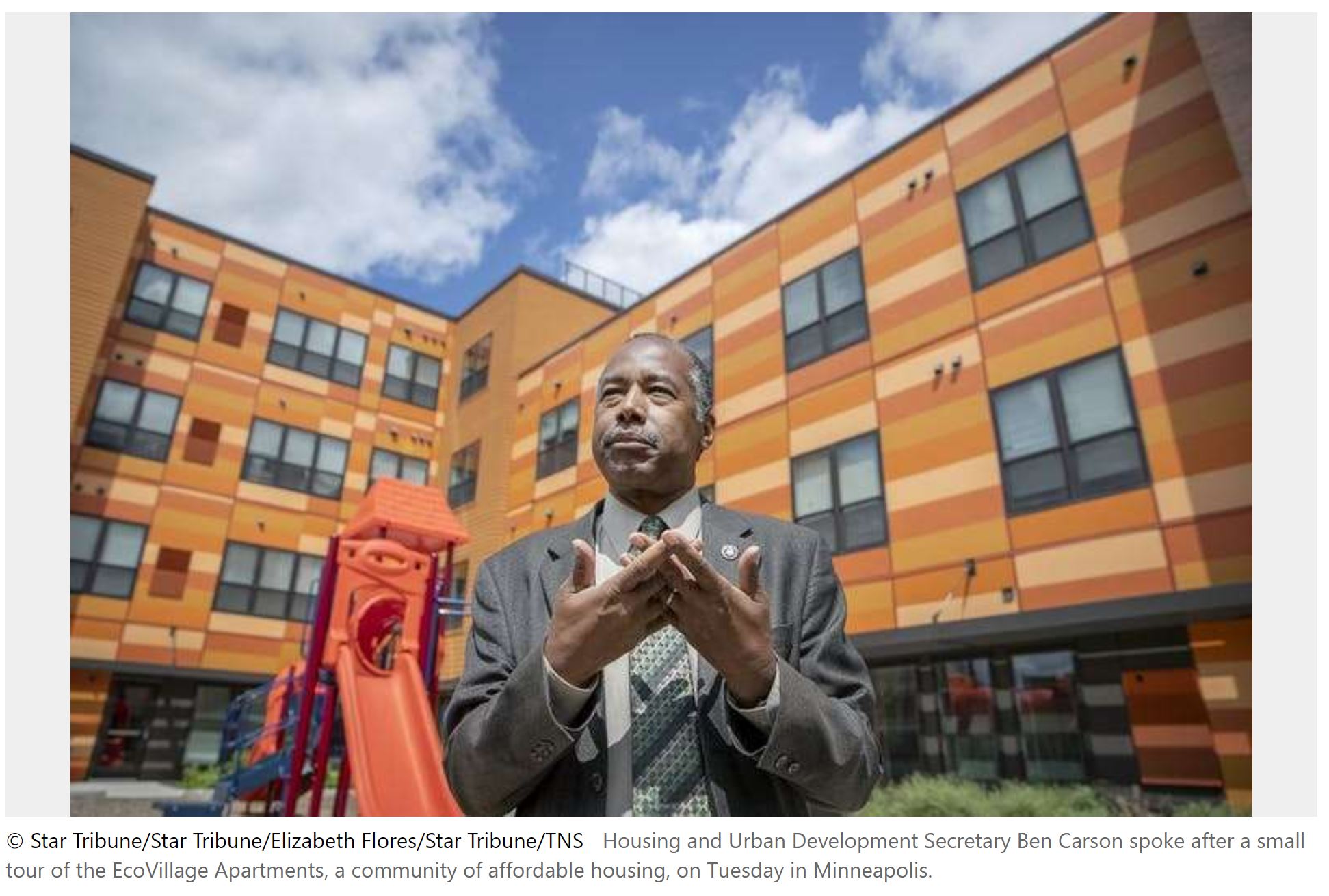 Carson says that state and local governments are driving up the costs of housing by having too many regulations. “Our country is facing serious housing affordability challenges,” Carson said. “Too many families can’t afford a home mortgage, and too many Americans face high rent prices … We must do more to increase supply and bring down housing costs by reducing state and local regulations and zoning restrictions.”

In December, the Minneapolis City Council passed an ordinance to remove single-family zoning. By being able to add density to single-family neighborhoods, city officials believe they’ll be able to better address housing affordability head-on and end segregation. Up to 60 percent of Minneapolis had been zoned as single-family only.

“The correlation seems very strong: the more zoning restrictions and regulations, the higher the prices and the more homeless people,” Carson told a crowd. “I don’t think there’s anybody that wants to see homelessness and squalor. We just have to start utilizing the facts and utilizing the evidence to create the policies.”

Carson has flagged government regulations that could be standing in the way of adding more housing. For example, at a conference in May, he took aim at California’s mandate that all new homes must have solar panels by 2020, which he says will further drive up the price of new homes in a state that already has some of the highest home prices in the country.

“Regulations such as density limitations, height restrictions, parking requirements, lengthy permitting and approval processes, and ‘not in my backyard’ … opposition are the primary reason for housing supply restrictions and increased housing costs,” Carson said at a May 17 meeting in Washington, D.C. “HUD is working with local public officials, business leaders and community leaders to mobilize support for smart but significant deregulation at the local level.”